Drain Doctor Anglia Recognised For Its Support To The Armed Forces 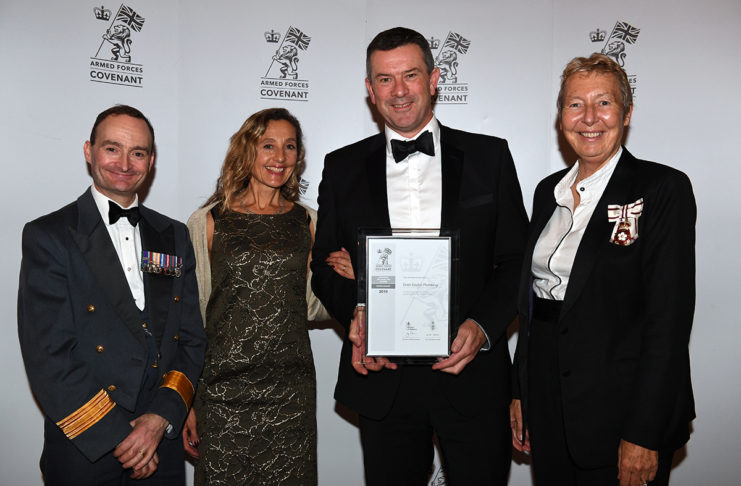 Reading Time: 2 minutesIn recognition of its continued support of military veterans, Drain Doctor Anglia has been presented with the Armed Forces Covenant Silver Award at an exclusive ceremony on 14 November 2019.

Rob Simpson, Director of Drain Doctor Anglia, attended the event with his wife Sam and was one of 19 East Anglian businesses to be presented with this award during 2019. The event took place at Emmanuel College, Cambridge with the Awards being presented by Air Commodore Paul O’Neill and H.M. Lord Lieutenant for Cambridgeshire, Mrs Julie Spence OBE.

The Silver award is presented to those companies who have signed the Pledge to Support the Armed Forces and who have subsequently demonstrated support to tackle Service Personnel issues and to communicate their status as an Armed Forces friendly organisation.

“As a company we have the utmost respect for our Armed Forces and are pleased to offer any support we can to those who have or continue to serve. The recognition for our support is an added bonus and we are thrilled to have received the Silver Award. We have always looked favourably at recruiting ex-service personnel and they have been a great addition to our business, as well as being steadfast and hard working,” said Rob Simpson.

Ex-military veteran, Steve Jones, is an example of someone who made the transition into civilian life and is now a Drainage Engineer at Drain Doctor Anglia. He added: “After leaving the Army, I responded to an advertisement for a Groundworker and was then offered full time employment with Drain Doctor Anglia. I spent the fist six months training with senior engineers, where we carried out remedial drain repairs, and then I was promoted to Drainage Engineer. I am hugely grateful to Rob for giving me this opportunity and to be able to provide for my family.”

A year ago, Drain Doctor Anglia signed the Armed Forces Covenant to acknowledge its continued support of the armed forces community, as well as demonstrate how it understands the value of service they can bring to civilian life.

Trading for more than 10 years across East Anglia, Drain Doctor provides emergency plumbing, blocked drains and drain repair service that covers Suffolk, Norfolk, Cambridgeshire, Essex, Kent, North East London and South East London. It offers a reliable, cost effective and trustworthy 24 hour call out service for emergencies, both domestic and commercial. The family owned business is part of a national franchise network of over 55+ Drain Doctor locations across the UK.

Drain Doctor Oxford Recognised For its Health and Safety Credentials

Leading drainage and plumbing business, Drain Doctor Oxford, has been awarded the CHAS accreditation (The Contractors Health and Safety Assessment Scheme) in recognition of...
Read more

With over two decades of experience in the steel and logistics industry, German born and bred Sascha Hunsinger has scrapped his life of metal...
Read more

We were contacted by a recently retired couple in Sunderland who had been looking for a company who could provide a garden building designed...
Read more

Neighbourly®, part of the world’s largest franchisor of home service brands, celebrates another milestone year in 2019 with five of its UK brands announced...
Read more