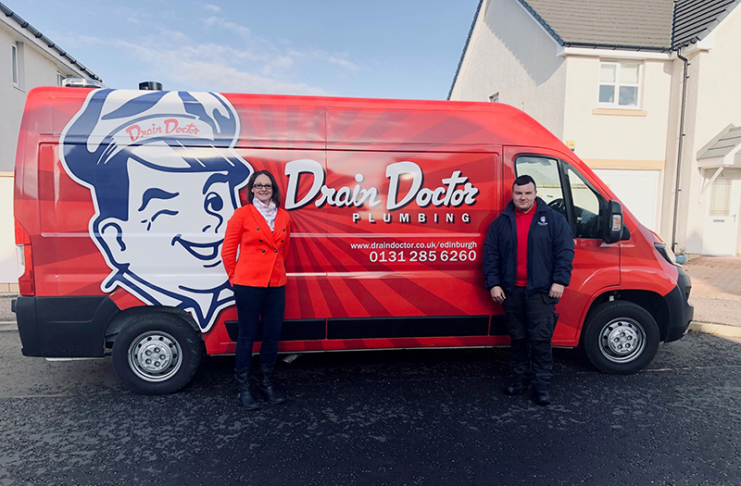 Prior to the launch of her new plumbing and drainage franchise, Rachael spent 14 years working in Financial Services where she held the position of Product Manager at several blue-chip organisations, including Royal Bank of Scotland and Tesco Bank. Within these roles, Rachael was responsible for creating and implementing action plans to drive trade, hit targets and deliver results, skills that will prove invaluable to the day to day running of her business.

Rachael’s lifelong passion for the industry, alongside her experience of working within finance and managing teams, will drive the success of her business; she often recalls how she wishes she had trained as a plumber when she was at school to capture the female tradesman market. Having just reached her milestone 40th birthday, Rachael decided that it was time to achieve this lifelong ambition of being her own boss and setting up a plumbing and drainage business.

Not wanting to start a new company from scratch, Rachael chose to go down the franchising route and make an investment in a sector and with a brand which was well known and growing fast. Drain Doctor fitted the bill, particularly as it was part of Neighbourly, part of the world’s largest parent company of home service brands, with a franchise network of over 3,700 franchisees worldwide.

The new office, which is based in Winchburgh, West Lothian, is ready to start trading from 11 November 2019. Alongside her qualified drainage technician, Kieran, and Drain Doctor branded van, which is fully equipped with new jetting units, cameras and the latest technology, Rachael will be available to serve homeowners and businesses across Edinburgh.

Rachael said: “As soon as I started engaging with Drain Doctor, I knew it was the franchise for me. I was very impressed with their corporate values, scale and strategy for growth, but most of all, I’ve been overwhelmed with the level of help and support that I have received at every step along the way, from my initial enquiry to being ready to launch.

“The devil on my shoulder wanted to take on a traditionally male dominated industry and to achieve success through doing things differently. I believe that my ethos and ways of working, combined with the Drain Doctor culture of delivering an exceptional level of service will be a winning combination. I am really looking forward to getting stuck in and to be a key player in my city.”

Pierre Jeannes, managing director of Drain Doctor, added: “I’m proud and delighted to welcome Rachael into our close network of Drain Doctor franchisees as the first solo female franchise owner. With her proven experience managing teams in large blue-chip organisations, coupled with her passion for the industry and her enthusiasm to make the business work, Rachael exemplifies the kind of franchise owner we look for across our industry and shows other women the fantastic opportunities that exist in our growing network.”

Drain Doctor Oxford Recognised For its Health and Safety Credentials

Leading drainage and plumbing business, Drain Doctor Oxford, has been awarded the CHAS accreditation (The Contractors Health and Safety Assessment Scheme) in recognition of...
Read more

With over two decades of experience in the steel and logistics industry, German born and bred Sascha Hunsinger has scrapped his life of metal...
Read more

We were contacted by a recently retired couple in Sunderland who had been looking for a company who could provide a garden building designed...
Read more

Neighbourly®, part of the world’s largest franchisor of home service brands, celebrates another milestone year in 2019 with five of its UK brands announced...
Read more